One of the most beautiful buildings located on the river Arno in Pisa, Palazzo Agostini, or also called Palazzo dell'Ussero or Red Palace, is home to the Coffee dell'Ussero since 1775 but also the Cinema Lumière since 1899, family owned accounts and patricians Pisa Agostini Fantini Venerable Silk Road. One of the first documents the existence of the building comes from the archive Private Agostini family, the act of purchase of the building that describes the palace of San Martino in Stone features four floors and a garden of citrus trees and a tower partly covered. A second find the documentation in his Memorial to John Portoveneri which shows the demolition of the most important buildings in the occasion of the bombing by the Florentines took place on October 2, 1945. 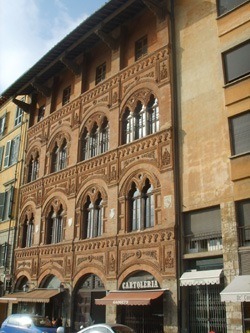 Initially the building was owned by the auction, then passed into the hands of Nicholas of Alutine by Celine and, in 1496, between the properties of Mariano and Peter Agostini part of a family home with Merchant, in particular, was specialized in silk trade and writing for a long time to the nobility of Pisa. The palace was built between the fourteenth century and the XV with a brick surface completely adorned with terracotta decorations phytomorphic and jointed arms and signs, one of the most important examples of Gothic architecture in Tuscany. The facade features five pillars that travel throughout the length starting from the porch on the ground floor to the roof. Regarding the first place on the embankment you can see the presence of low arches and vaults, arches outside meticulously decorated with representations in relief also present in the upper floors. On the first floor are four double windows, and upstairs to the area right two three-light windows, numerous coats of arms are present, as well as that of Agostini, families that have alternated in the ownership of the building, while the top floor was present once an open loggia.

On the ground floor of Palazzo Agostini find the "Coffee dell'Ussero", opened on September 1, 1775, the location of the National Academy dell'Ussero. In 1839, coffee was the place where the meetings took place in the Italian Congress of Scientists also on its walls, we can enjoy the memories of her most illustrious patrons as Filippo Mazzei, Francesco Domenico Guerrazzi Giuseppe Giusti, Antonio Guadagnoli, Henry Panzacchi Renato Fucini, and many others. The name coffee is of uncertain attribution, it was never stated in the lease of 1799, probably derives from Hungarian Huszár (Hussar), from the greek "pirate". He was taken into custody in 1944 by the American armed forces, reopened in 1945 as a coffee-tobacco under the name Usserino, after the coffee was restored and reopened in 1959.

The oldest still active Italian cinema, Cinema Lumière initially projected in the billiard room of the Cafe dell'Ussero. It was later renovated in 1905 at the hands of Louis Bellincioni and placed in the back of the building, where once there were some buildings that were part of the church of St Hilary in the Golden Gate. Exactly 19 October 1906 there was the sound of the first experiment films with Professor Peter Pieirni University of Pisa, patent granted by Fabbrica Pisana film Talk to the diction of the electrical system for synchronized movement, and once perfected the operation, as Isosincronizzatore. Because of the fighting of the Second World War, cinema was closed in 1944 and reopened under the name Supercinema in 1946.

Built in 1583 by Bernard Buontalenti, commissioned by Francesco I de 'Medici, Palazzo Medici in place of place in the church and convent of San Matteo. According to the draft were included houses and medieval towers of the XI - XII century, and, somehow, still visible as the tower of the accounts of Compost Gaetani, Pamaya and Oriseo also was revised several times between the XVII and XIX century. 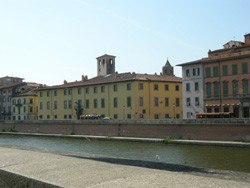 In an alley located to the left of the building we see huge arches of a medieval structure, low siltation due procured At rise of the floor. In the courtyard we can see the ancient tower consists of an arched portal in wart, two windows with lintels and a simple single pentagonal mail higher.

Also present were the remains of a porch features two columns with ornate capitals. Here we met the Medici court, especially in winter, with guests including Galileo and Francesco Redi, died here on March 1st of 1697. The building was then in the hands of Lorraine, who gave the name of the Royal Palace, was later the residence of the Savoy and the Italian State. Since 1989 the palace houses the National Museum which contains considerable evidence families who attended his rooms including portraits, furniture, paintings, armor, etc. ...

The history of the prestigious Palace Roncioni

Built around the first half of the seventeenth century, the Palace Roncioni presents an architectural style typical of Buontalenti, long a reference point for many intellectuals and artists who went there and stayed for a long time. The first owners, the family Navarette, in 1662 sold the building to the family Roncioni known daughter Isabella Roncioni he did fall in love Ugo Foscolo, the muse for the writing of Jacopo Ortis. Angel Roncioni and Andrea Agostini in 1794 inaugurated the Academy Roncioni, cultural club where they met artists and famous people and where they place the most modern theater of the time. During the Luminara di San Ranieri, Vittorio Alfieri was a guest of the palace in 1795 for perform in one of his works, Saul.

Other notable personalities visited the rooms of the palace, it was the home of writer Madame de Stael in 1816 and Louis Bonaparte, Napoleon's brother. The interior is decorated with many precious stone decorations and frescoes, the floor was painted by the skill of the painter GB Tempesti in 1789, also is also a luxurious marble fireplace, by the sculptor G. Baratta. Noteworthy also Rocioni staircase that leads to the palace by the Arno river, one of the few examples of commercial ports and commercial fishing period, the period prior to the works of embellishment on the Lungarno.

Commissioned by the Baptist Lanfreducci, a leading exponent of the Pisani family of the thirteenth century, the palace was restored by Cosmo Day Pugliani to the early seventeenth century work which give it its current appearance. Called by the Pisani Palace Day for the inscription above the door by the owner, Knight of Malta Francis Lanfreducci that, following the detention in the prisons of Algiers wanted to witness the uncertainty of earthly life.

Also for the same experience Lanfreducci did add a piece of chain above the main entrance of the palace entrance. Behind the building there was a called church of San Biagio Chain, owned by the family Lanfreducci. Today the building houses the Rector of the University of Pisa.

One of the ancient medieval tower, now one of the towers in the best condition in Pisa, is placed in the courtyard of the Palace Day. The tower has a rectangular plan that extends the height of seven main levels at the height of the floors, and continues in the oldest part of the second half of the twelfth century, the top floors date back to the fourteenth century.

In environments highest decorations are made with special arrangements of bricks to form decorative borders. A medium height you can see the profile of a long period of unloading, is deduced from the design of low ogival shape. The openings are divided into form and invoice, rectangular ones have more size small and dating older, also present with arches and mullioned windows, the penultimate floor, a double lancet window characterized by a brick column with a capital.