Holidays between the Monti Pisani! 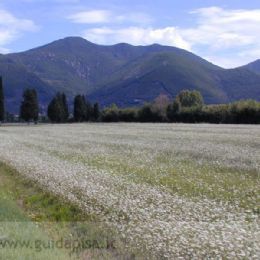 The Monti Pisani delineate the northern border of the province of Pisa separating from Lucca. No peaks are very high but are found in various scenarios: steep slopes, gentle slopes and valleys crossed by streams.

The mountains have a vegetation of chestnut trees and pine trees, while their slopes have a different appearance due the cultivation of vines and olive trees.
The long road that runs along the slopes of the Pisan mountains, called simply "Lungomonte", is characterized by small villages by ancient villages, castles, monasteries, churches and castles, remains of fortifications and aqueducts.

THE COUNTRIES OF THE MONTI PISANI

The City of Buti:

located on the eastern slopes of Mount Pisano, precisely on the Rio Magno, it seems to have Roman origin.
An inevitable appointment with the tradition you have, every year, on the first Sunday after January 17th with the Palio of San Antonio.
Each district of the town parade in a parade through the streets of the country and in the afternoon there is the race of the horses where he was awarded with the "Palio", the horse, the jockey and winning contrada.
The typical dish of this holiday is the tripe Butese.

The City of Calci :

the origin of the name comes from the Latin calx Calci, calcis, or lime.
The name was due to the presence of lime in the stone quarries located in Lungomonte.

The municipality and 'situated on the slopes of Mount Pisano and is characterized by the production of high quality oil, in fact, is part of the "Road of the Consortium of Monte Pisano."

La Certosa: founded in 1366, is one of the largest monasteries of Tuscany. built in different times and suffered 'many renovations in the seventeenth and eighteenth centuries.
Situated in a valley of great landscape planted with olive trees, known as Valgraziosa, the Certosa is encased in a wide surrounding wall. Once inside the large main gate lies the great Court of Honor which overlooks the monastery.
Suppressed because of the Napoleonic laws (1808), it became property of the state, while continuing to host the Carthusian order, until 1972.
Today, in the environments where once held the activities' of production and craft (barns, wineries, shops of blacksmiths, carpenters, etc.), Houses the Museum of Natural History and Territory , University of Pisa the great Court of Honor which overlooks the monastery.

To find restaurants in Calci visit " Restaurants and Taverns in the country of Calci "in the" Shopping and Dining "section of our website!

The Municipality of San Giuliano Terme:

located at the south-western slopes of Mount Pisano, between the river Serchio and the Arno River, the town of San Giuliano Terme is a famous spa resort that includes an area rich in artistic, natural and historical attractions, such as churches, abbeys, castles, etc ...

It is located on the right bank of the river Serchio and is famous thanks to the nearby seaside resort of Marina di Vecchiano.
Every year in April, along the Serchio river, hosts the "Spring Fair" where you can taste the sweets (like the "cake with pegs") and admire the old crafts.

For information on spas visit "The Baths" in the "Hospitality and leisure" of our site.

It is located between the Arno and the Monte Pisano and is characterized by the production of ceramics and from bottling of mineral water.
Each year there has been a rich and organized cultural events and promotional season. One of the many events is the "Medieval Feast" in which recreated a fascinating insight into medieval life in glimpses of the old town.