Small Gothic church located at Lungarno Gambacorti of Pisa, the Church of the Thorn was built in 1230 at the behest of the Gualandi family, originally named Santa Maria di Pontenovo on the bridge that connected the Via Sant'Antonio Via Santa Maria. It is believed that once the church holds a thorn crown placed on Jesus' head during his crucifixion, brought to the church in 1333 and, since the nineteenth century kept in the Church of Santa Chiara, for this reason the Church of the Thorn. 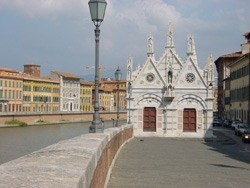 In the beginning the church was to be built in one lodge and topped by a gabled extension works were authorized by the City since 1322, started in 1323 and concluded in 1376, most likely directed by Francis Lupo. In later years the church underwent several restorations due to soft ground as the adjacent Arno. Some members of the Academy of Fine Arts, after the Unification of Italy, established the necessity of rebuilding the church in a more stable and the demolition of this structure. These works were directed by the architect Vincenzo Micheli 1871 to 1875 that placed the church a few yards further east and in a higher position.

But these actions also bring significant changes to the church were in fact added a few steps, and some statues were restored and replaced vestry, built in 1613, was not rebuilt, disappearing altogether. The church was always under the guardianship of the Council, except for short periods, from the seventeenth to the eighteenth under the direction of the hospital.

The exterior of the Church of the Thorn

One of the most famous gothic example in Europe, the Church of the plug has a rectangular characterized by polychrome marble along the perimeter, the outer walls have cusps on the roof, tympani and tabernacles with architectural elements such as sculptural rosettes and inlaid statues Pisan masters of the fourteenth century among which Andrea Pisano, Giovanni Balducci and Francis Wolf. The facade has two entrances with arches architraves including the tabernacle is the place where I placed the statues of the Madonna and Child with two angels, attributed to Giovanni Pisano. In the upper part of facade there are two niches that hold the statue of Christ with four angels. At the left are decorated with many cusps and thirteen statues of the Apostles and Christ, made by Wolf and the smaller statues placed on the gables are attributed to Nino Pisano and niches in the pillar on the right, which houses the statue Madonna and Child are John of Balduccio. In the area behind it are three arches characterized by simple windows, gables that are decorated with symbols of the Evangelists alternating with niches with statues of St. Peter, Paul and John the Baptist as the last guardian spirits a statue of the Madonna and Child by Nino Pisano.

The interior of the Church of the Thorn

Place in connection with the outside area, inside the Church of the plug is very simple, it is characterized by a single room decorated with ceiling dating back to Reconstruction of the nineteenth century. In the center of the chancel are works of Gothic sculpture as the Madonna of the Rose of Andrea and Nino Pisano, while in the wall on the north is the shrine Work placement where the plug was placed in the crown of Jesus was once also the Madonna Milk, statue of Pisano later transferred to the Museo Nazionale di San Matteo.