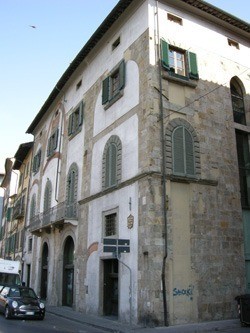 Place at the Lungarno Gambacorti, the palace Alliata, is the result of different medieval buildings that belonged to a period between the eleventh and twelfth centuries.

On the front it is clear the award given the presence of medieval stone piers supporting arches that house wart on the upper floors and roof, while the windows are here today to award past are also identified some string course lintels.

Along Via Mazzini, you can see the various buildings that are part of the building, have significantly different structures and, on one of these, there were numerous single and a double lancet window, almost as if there was a porch. 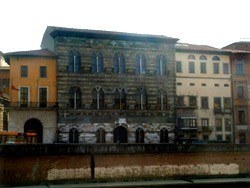 One of the most famous buildings and famous places along the river Arno, Palazzo Gambacorti was built between 1370 and 1392, precisely between the Via Toselli and via Degli Uffizi, the entrance of the Ponte di Mezzo. The structure was built at the behest of Peter Gambacorti the design of Thomas Pisano, the noble family was included in the rank of nobility rich merchant of Pisa and owned considerable land in Era. The Gothic-style facade dates from the fourteenth century, embellished with elegant mullioned windows, a second front is back, created in the seventeenth century, has very large windows with semicircular gables and an interesting portal with them Medici coat of arms.

In the fifteenth century the building was transformed from private to public office, housed in fact the judiciary, the Consuls of the Sea, Customs and Priori citizens. Returned to its main function in 1533 passing into the hands of the family who started Tignoso expansion projects by merging two other buildings on both sides of the building, which still are part of the structure even if you show him two buildings. Later in the eighteenth century, passed into the hands of the Lorena who established the Courts, while a century later was the seat of the State, the Fire Corps Barracks and Guard Hall, now houses the Municipal Administration. 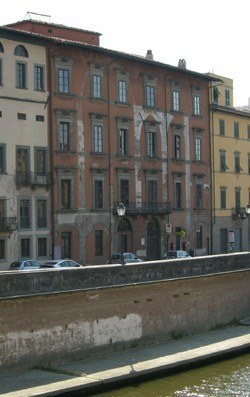 A document from 1302 attests to the building, in the same area where Moscow stands today, a rich domus at the behest of wealthy Moscow merchant who assembled in San Gimignano and restructured a number of adjacent buildings it had purchased.

On the front you can find the profiles of the pillars and stone arches that represent the structure of the building presents a round arch, a pointed arch flanked by a stone pillar stone wart all supported by segmental arches of the floor the first floor.

The windows are of recent date and by Toselli you can see the outlines of the original openings closed today.

The Palace Giuli Rosselmini Gualandi is placed at the Lungarno Gambacorti, not far from the Lombard church of Santa Cristina. In recent years, is known as the "blue building" for the color dell'intonacatura applied during the recent restoration and the name of the center of the museum, which occupies several rooms of the interior.

The earliest evidence dating to the Middle Ages, specifically the eighth century, a rural settlement site at the church of Santa Cristina, near the only bridge to the present time, the Ponte delle Pietre that allowed the city entrance to the area to the south of the Arno River, continuing along the ancient Via Emilia Scauri. During the restoration work carried out by Fondazione Cassa di Risparmio di Pisa, formerly in the hands of Count Julian, was found part of the original pavement of the street, featuring terracotta Sestini willing to herringbone, with adjacent pavement due to the twelfth century. 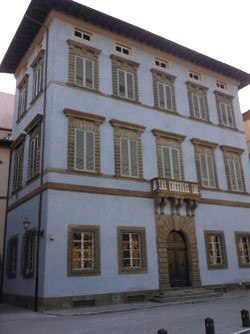 Also unearthed was also a large masonry structure was originally part of a defensive tower, particularly interesting for the opening ogival, dated to the last years of the eleventh century. It was part of the Municipality of Pisa in 1155 following a period in which they were started construction of the oldest defensive wall, present in Italy, the medieval period. At that time under the consulate of Cocos Griffi, all structure is integrated with tower houses, which are present in the rest of the city, for this reason called the city of a thousand towers, symbol of the wealth of the Maritime Republic. The Duke John Lamb, in 1356, who owned several houses in the area, was allowed, by the Elders of the City to expand this area. Thus we are witnessing the birth of the first core of the building, a structure characterized by massive stone pillars wart.

Between 1406 and 1494, during the first Florentine domination, the structure underwent many changes, even since the breakup of the family of the Lamb. Towards the end of the fourteenth century became part of the possessions of the town, becomes the property of the Republic of Florence, which uses the building for the headquarters of the five supervisors who attended the surveillance of the city already occupied now, finally back in the hands of Giovan Bernardino Delll'Agnello. With the help of the French king, Charles VIII, the city regains freedom freed from Florence in the very rooms of Palazzo Giuli, one of the most important episodes in the history of Pisa.

The king enters the city on 8 November 1494 to command an army of three thousand horsemen, housed at the Palazzo D'Appian, before which the Pisan demanded freedom from Florence, in 1495 the king was welcomed back from Pisa, at a dance that took place in the same palace, the most beautiful women in the paid homage, proposing the same request. Despite the king showed himself willing to welcome applications in 1509, Pisa again lost freedom under the rule of Florence, which began processing numerous works that made it lose in Pisa all symbols of its former glory Republican.

The church of Santa Cristina and the Palace Giuli

On the orders of the family Sancasciano and text, the building was heavily transformed into the last years of the sixteenth century by magnificent medieval domus home late renaissance thanks to a simple decoration on the facade decorated with stone inlays. Towards the second half of the eighteenth century further changes were made by the Agostini family, which inherited Revered by the family's palace, then rented by the Director of Greek Russian Imperial College, Dr. Caesar Designed at the request of Empress Catherine II.

Thanks to the great artistic ferment Russian famous Italian masters arrived at the court of the Tsar who planned palaces in St. Petersburg, they reported their experience in the Tuscan town of blue depicting the palace to soften the forms. Was hosted in 1781 the director of the Russian Academy of Sciences, Ekaterina Dashkov, who left the game documentation and the Palace Bridge. Following the discovery of a fragment of the late eighteenth-century painting, with the restoration, the current color was applied with the technique of fresco painting.

The family Agostini he sold the building, bought back by the family of the text that will later in the hands of a family-Arms Cambini that it will launch a series of major renovation work, we can see the door of the hall of Grotesque, which houses the family crest. In 1861 the building was purchased by Count Ferdinand Dominic Giuli for the sum of 50,000 lire, which began a series of works that brought the building its present appearance, with the fusion of a portion of road located between the palace and the palace Casarosa and the construction of a new airline from scratch. From this then when the building goes through a period of continuous shine, because all rooms are newly renovated and decorated thanks to the skill of the artist Nicola Pisano Torricini, author of the huge library of Count Julian, located on the ground today polyptychs room that houses the Altarpiece Agnano of Cecco di Pietro. 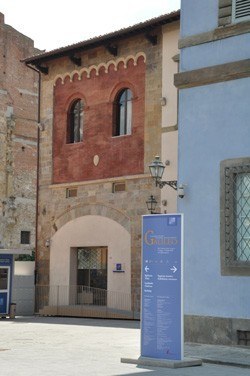 Until 2001 the palace was inhabited by Count Giulio, and although it was the place of ambush for the Allies during the Second World War, it suffered significant damage. It was later bought by the Fondazione Cassa di Risparmio di Pisa, turning it into a cultural and artistic venue called BLUE - Center for Art and Culture, and transferring its seat.

It 'can visit the ground floor and main floor where visitors can admire masterpieces of the collection of Foonzaizone that includes artists as Taddeo di Bartolo, Vincenzo Foppa, Cecco di Pietro, Giuseppe Bezzuoli, Giovanni Battista Tempesti, Orazio Gentileschi, and an extensive collection of including nine hundred Mino Rosi, Umberto Vittorini, Fortunato Belloni and Ferruccio Pizzanelli. We also enjoy a wide range of works from the repertoire of Antiques and a remarkable collection of coins of etchings, woodcuts and lithographs by Joseph Viviani.
Other rooms of the building are reserved for temporary exhibitions which take place frequently.

Medieval Palace of Pisa, Gualandi House is located between the Lungarno Gambacorti and via letters, before the church of Santa Maria della Spina. The structure still has the medieval look of the XII century with high stone piers verrucana to the ceiling, where there are also pointed arches, now no longer present for further processing which provide for the opening of new windows. Along the various floors of the house you can see brick segmental arches that once supported the lofts of various levels of pavement while the large rectangular windows all date back to a later period.